The main principle of the Library implies that all readers should desire to spend as much time in the Library as possible – to study and communicate. The Library team creates comfortable conditions for users to get full access to information resources as well as the possibility to work with books and periodicals on conventional carriers and with electronic documents. 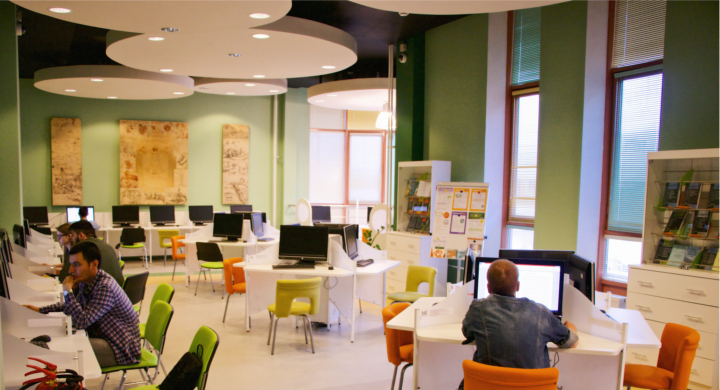 Scientific and Technical Library of Gubkin University was founded in 1930 after the reorganization of Moscow Mining Academy and separation of Moscow Oil Institute as an independent educational institution. Those days the Library book stock accounted for 3,000 volumes and it employed 6 people.

In 1934 the Library numbered nearly 60,000 volumes. The Institute provided the Library with a 440 sq. m. room and a reading room for 100 seats; the book stocks available in study rooms for social sciences and oil economy were transferred to the Library by the order of the Institute.

The Library became of particular importance in 1938, when it merged with the Oil Industry Library and its valuable collection of Russian and foreign books and journals – 36,000 volumes in total, including nearly 7,000 foreign books. After merging, the Library became a methodical center of oil libraries in Russia.

As soon as the new building of the University was erected, in 1965 the Library moved its funds to this building.

In summer 2014 the Library moved to a new building of the University.